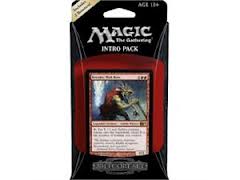 Goblins have a simple philosophy: Why bother trying to outthink the opposition when you can just set them on fire instead? If this sounds good to you, join Krenko, Mob Boss with the "Mob Rule" deck.

This deck doesn't waste time with subtlety. Its primary tactic is to make a horde of Goblins and attack! Your shrieking battalion includes Goblin Arsonist, which can be lethal even when it dies, Mogg Flunkies, which is surprisingly big but won't attack by itself, and Goblin Battle Jester, which can keep your opponent's creatures from blocking. Krenko himself can double the number of Goblins you have each turn, quickly providing you with an overwhelming force.

Goblins aren't the only weapons in your arsenal. Flying, fire-breathing Dragons such as Dragon Hatchling and Furnace Whelp are devastating in the air. Both Trumpet Blast and Cleaver Riot supercharge your attack. Spells like Chandra's Fury and Volcanic Geyser burn away potential blockers—or the last remnants of your opponent's life total. Red's outright aggression is well matched to the brutal side of green's nature magic: Titanic Growth and Serpent's Gift are both ways for a 1/1 Goblin to take out a gigantic opposing creature.

If you're looking for ways to make this deck even more savage, Thundermaw Hellkite is a great addition. This 5/5 flying Dragon has haste and can clear opposing fliers out of its way! Firewing Phoenix is another red flying creature, and like any good Phoenix, it won't stay dead for long before rising from the ashes. Finally, the planeswalker Chandra, the Firebrand can double your spells and deal plenty of damage in her own right.